I Am Waiting is a 1957 Japanese noir movie directed by Koreyoshi Kurahara. 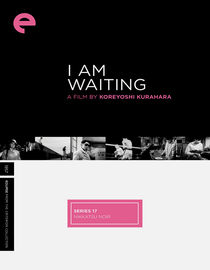 To mark the occasion of the Film Diary being back in-print, we thought it would be fun to start a regular blog post talking about some of the movies we watch, since our love of movies is what got me started on the idea of making a film journal in the first place. I'm no professional when it comes to talking about film and I get annoyed when reviews give away too many plot points (I don't even like reading the Netflix summaries), so I won't get into the movies too much, but just put in a plug for the ones I really enjoyed.

I picked up the Criterion release of Ugetsu at the library because I had heard of it, but didn't know anything about it besides that it sounded familiar as something we should see (turns out it was on the list of top 100 films that we've been trying to get through). I didn't make the connection that we had been watching a couple earlier films by the same director,  Kenji Mizoguchi. All the same, the movie just sat there in the pile, feeling a little bit like homework. You know those movies that you should watch, but are never in the mood for, but it turns out Ugetsu is his masterpiece and it really is a pretty stunning work. When it comes to Japanese directors as household names, he doesn't seem to be too well-known, and while I don't agree with Godard's assessment of him as "quite simply one of the greatest of filmmakers," I do think that Ugetsu and Sisters of the Gion are worth watching for his storytelling and composition, the acting, and unusual material.

We didn't have time to partake in much of the 32nd Portland International Film Festival, but we wanted to see something and The Beaches of Agnes jumped out at us since we loved the two Agnes Varda films that we had seen, Cleo from 5 to 7 and The Gleaners and I. Even though we ended up with craned necks and a bit of screen sickness from being relegated to the third row, the movie was totally worth it. It's a filmic memoir composed like memories are--disjointed, fanciful,

random, sentimental. Varda has lived an incredibly colorful life and coming from anyone less charming, this might have come across as self-aggrandizing, but instead it is beautiful and inspiring. I don't want to go into details of the movie as each little bit builds up to making the wonderful whole, but I highly recommend seeing this if you get a chance.